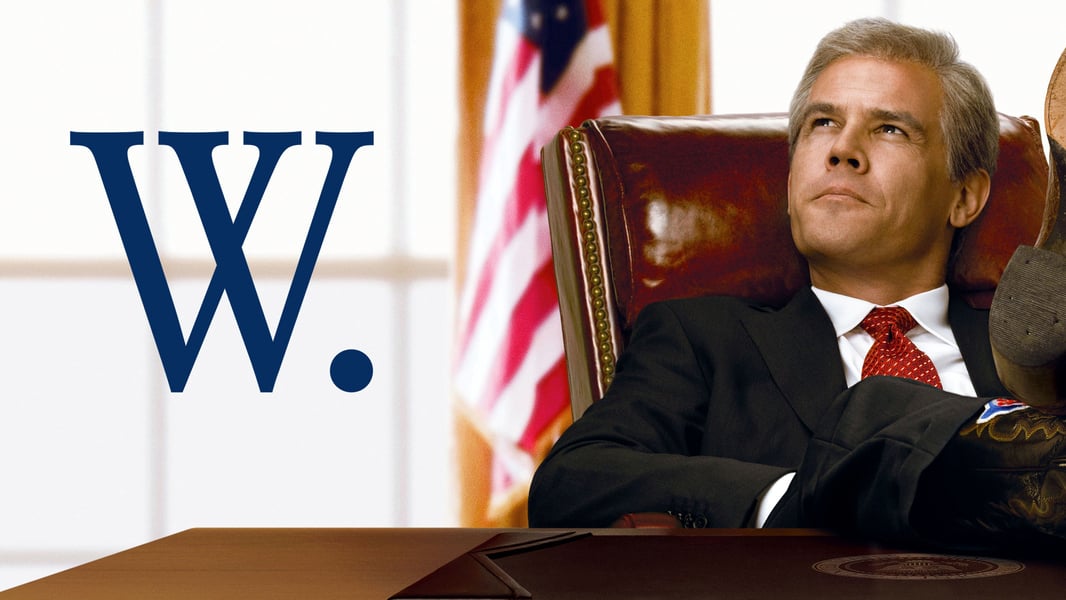 The story of the eventful life of George W. Bush—his struggles and triumphs, how he found both his wife and his faith—and the critical days leading up to his decision to invade Iraq.

In 1966, George W. Bush endures an initiation by his fellow Yale University students as a Delta Kappa Epsilon pledge. During the hazing, Bush successfully recalls the names and nicknames of many of the fraternity members, and states that his family’s political legacy is one in which he has no interest.

After Bush is jailed in New Jersey for rowdiness following a football game, his father, George H. W. Bush states that he will help him, but for the last time.

Following his graduation from Yale, Bush takes a job at an oil patch back in Texas, but he quits after a few weeks. In 1971, “Junior” reveals his real aspirations in a father-son talk: working in professional baseball. Bush is accepted into Harvard Business School with the help of his father.

After a night of heavy drinking, Bush crashes his car into his family estate and challenges his father to a fistfight. His younger brother, Jeb, stops the fight.

In 1977, Bush announces he will run for Congress to represent Texas’s 19th district. At a barbecue, Bush meets his future wife, Laura Lane Welch.

During a debate, Bush is criticized by his Democratic opponent, Kent Hance, who says that Bush is not a real Texan and has spent campaign contributions to throw an alcohol-fueled party for underage Texas Tech University students. Bush does poorly in the debate and loses the election, but with the highest number of votes for a Republican candidate in the state’s history.

In 1986, Bush becomes a born-again Christian, gives up alcohol, and mends his relationship with his father. The elder Bush invites him to assist with what becomes his 1988 presidential campaign, although Bush himself suspects that he only was asked because Jeb was busy.

Bush’s political advisor, Karl Rove, tells him that he has the potential to make a name for himself, but that he has not yet done anything with his life.

Bush becomes a front office executive of the Texas Rangers baseball team, while his father oversees the victory of the Gulf War. Although Allied forces win the war within 100 hours, the elder Bush decides not to invade Iraq to depose Saddam Hussein.

After his father loses the 1992 presidential election to Bill Clinton, Bush blames the loss on his decision not to depose Saddam.

In 1994, Bush runs for Governor of Texas. Despite his parents’ objection to him entering the race, he wins, becoming the 46th governor of Texas on January 17, 1995. In 2000, he makes a successful bid to become President.

Following the September 11 attacks in 2001, Bush labels Iran, Iraq, and North Korea as the “axis of evil”. In 2002, Bush searches for evidence that Saddam was creating nuclear weapons, and has the army prepared. All of Bush’s White House staff supports him except Secretary of State Colin Powell, who states that invading Iraq would destabilize the country.

Powell is generally overruled by Vice President Dick Cheney and Secretary of Defense Donald Rumsfeld, who insist that the war would secure the United States’ status as sole global superpower while spreading democracy throughout the Middle East.

In March 2003, the U.S. invades Iraq and the war appears to be a success, and Bush gives his “Mission Accomplished” speech on an aircraft carrier. When it becomes clear that there are no weapons of mass destruction within Iraq, Bush learns that the responsibility for finding them had been relegated far down the chain of command.

Bush discovers that Saddam gambled his regime and his life on the assumption that Bush was bluffing. Bush is asked in a White House press conference what mistakes he made as President, a question that leaves him flustered and speechless.

That night, Bush has a nightmare in which his father accuses him of ruining his family’s legacy, which the elder Bush claims was intended for Jeb. Bush dreams of himself playing center field at a baseball game. Bush attempts to catch a pop fly, but it disappears.