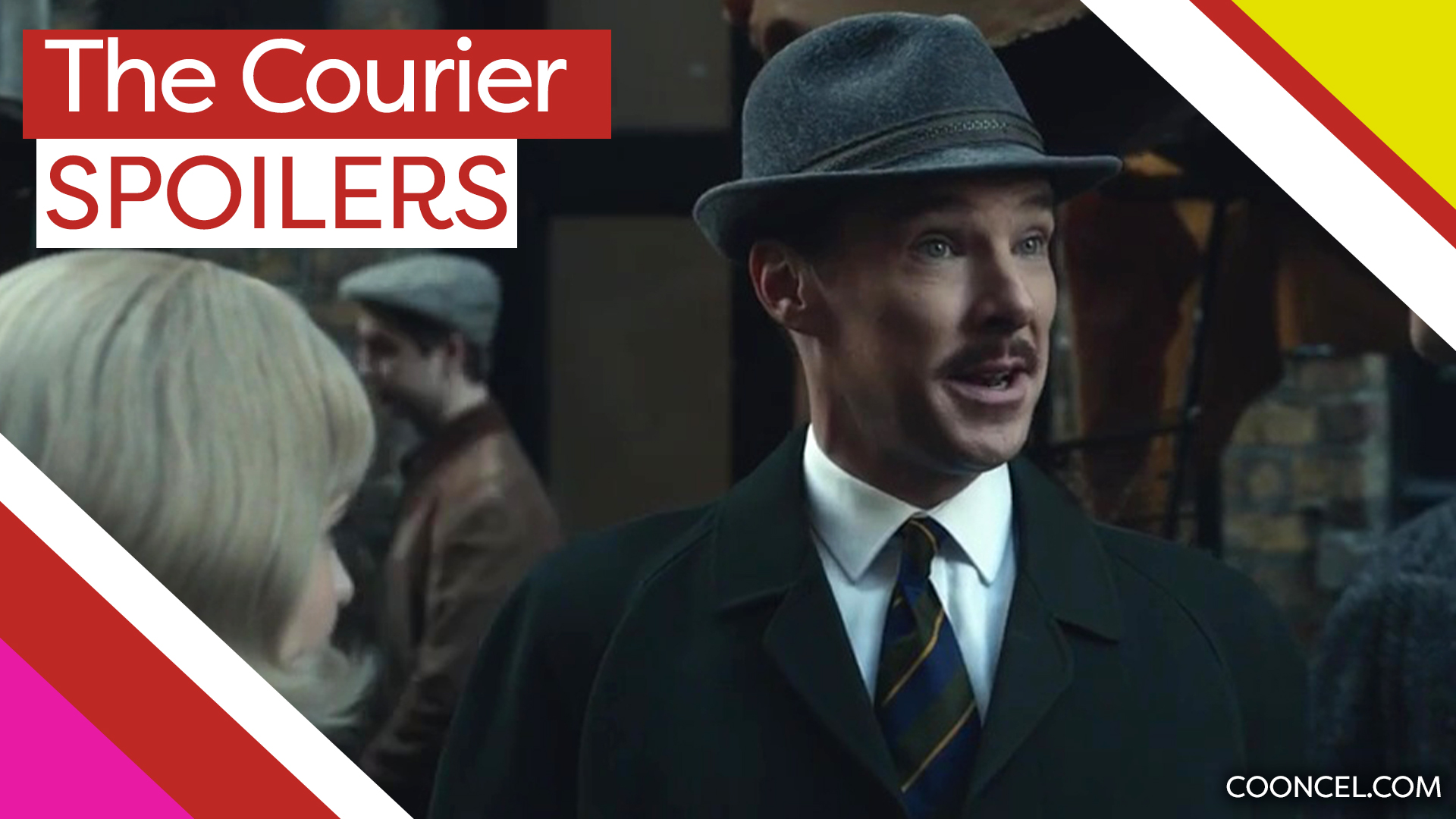 The Courier is a true-life spy thriller, the story of an unassuming British businessman Greville Wynne (Benedict Cumberbatch) recruited into one of the greatest international conflicts in history. At the behest of the UK’s MI-6 and a CIA operative (Rachel Brosnahan), he forms a covert, dangerous partnership with Soviet officer Oleg Penkovsky (Merab Ninidze) in an effort to provide crucial intelligence needed to prevent a nuclear confrontation and defuse the Cuban Missile Crisis.

The Courier Plot Summary and Synopsis

The movie starts in 1960 when the world was on the verge of imminent destruction.

Four months later a CIA officer Emily Donovan arrives at MI6 Headquarters in London. She informs MI6 officials that Penkovsky got in touch with the CIA and is codenamed Ironbank. MI6 officer Dickie Franks decide to use British businessman Greville Wynne to contact Penkovsky so that not blow the latter’s cover.

Wynne meets Franks, posing as an adviser of a Board of Trade, and Donovan. She explains to Wynne his mission. Wynne is thrilled and agrees to help. He is to come to Moscow and act as usual. He also needs to wear a particular tie clip Donovan gives him.

Meanwhile in Moscow Penkovsky, with a group of his colleagues, is forced to watch the execution of a man who betrayed the Soviet Union.

Wynne arrives in Moscow. Penkovsky recognizes him because of the tie clip and invites him to lunch, and then to Russian ballet. On their way back to the hotel Penkovsky describes Wynne’s further steps – go back to London and wait for the Russian trade delegation.

Wynne meets the delegation and shows them West End, while delegation members take photos thus trying to steal British technology. Penkovsky pretends to be drunk, but when everyone else goes to bed, secretly meets Wynne who introduce him to Donovan. Penkovsky asks her to use his information as a tool to bring peace.

Wynne decides to stop his cooperation with the secret services, but Donovan tries to make him rethink his decision by detailing the threat to his family with the possibility of nuclear war. Penkovsky goes to Wynne’s house for a dinner with the same goal, and Wynne reluctantly agrees to continue.

The department lead by Donovan grows as the number of classified materials provided by Penkovsky increases.

Wynne becomes more and more nervous with every trip to Moscow. His wife Sheila starts to suspect something is wrong.

A Russian spy in the UK informs his Russian supervisor that MI6 has a source in Russia. KGB immediately searches Wynne’s hotel room and interrogates Penkovsky. A KGB officer Gribanov poisons Penkovsky with a poisoned cigarette. Penkovsky spends a few days in a hospital but recovers.

Wynne informs his MI6 supervisor about the incident and is ordered to stop the mission as Penkovsky is expected to attend a trade fair in London next month. KGB doesn’t let Penkovsky go to London.

Wynne decides to go to Moscow to help Penkovsky to defect, very emotionally informing Donovan and Franks about this. Donovan goes with him. Franks points that she is protected under diplomatic immunity.

In Moscow, Donovan plans a defection with US embassy staff, and Wynne informs Penkovsky about the plan.

The operation is scheduled for October 28, 1962, but KGB knows it in detail. Donovan, Wynne, and Penkovsky are all detained. Gribanov explains Penkovsky KGB knows about him being a traitor since his poisoning.

Donovan is immediately released and is declared persona non-grata. Wynne is thrown into the cage after being stripped naked and humiliated. Donovan is safely back in London. She asks Wynne’s wife to deny any and all allegations so that to help her husband to get out of prison.

Wynne doesn’t tell KGB anything despite the tortures and starvation. He insists he was just a courier and knows nothing of the intelligence passed on.

Penkovsky is brought to joint interrogation with Wynne and confirms Wynne did not know what was inside the packages he delivered. Wynne assures Penkovsky that he achieved his goal of making the world a better place.

Penkovsky is executed and buried in an unmarked grave.

A year later, on April 22, 1964, Wynne is released in exchange for a Russian spy Konon Molody (Gordon Lonsdale), and reunited with his family. Later he resumed his business career and died peacefully in 1990.

The protagonist is safe back at home and is proud of his service to his country which helped to prevent global nuclear annihilation.

The movie claims to be based on real events but lacks historical accuracy, such as the fact that real Penkovsky informed KGB about Wynne’s existence who was arrested in Budapest, Hungary, the Russian satellite country at the time. A moderate, but stable Hollywood style interpretation of spy routine without James Bond’s movies gloss.

This website uses cookies to improve your experience while you navigate through the website. Out of these cookies, the cookies that are categorized as necessary are stored on your browser as they are essential for the working of basic functionalities of the website. We also use third-party cookies that help us analyze and understand how you use this website. These cookies will be stored in your browser only with your consent. You also have the option to opt-out of these cookies. But opting out of some of these cookies may have an effect on your browsing experience.
Necessary Always Enabled
Necessary cookies are absolutely essential for the website to function properly. This category only includes cookies that ensures basic functionalities and security features of the website. These cookies do not store any personal information.
Non-necessary
Any cookies that may not be particularly necessary for the website to function and is used specifically to collect user personal data via analytics, ads, other embedded contents are termed as non-necessary cookies. It is mandatory to procure user consent prior to running these cookies on your website.
SAVE & ACCEPT
March 15, 2021 Updated: 1 year ago