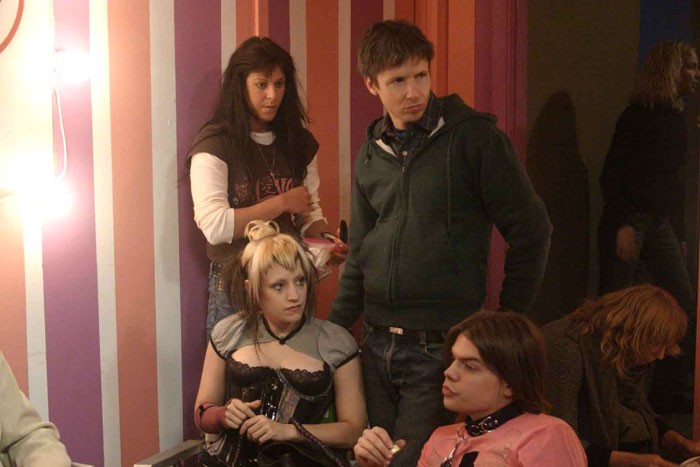 John Cameron Mitchell’s SHORTBUS explores the lives of several emotionally challenged characters as they navigate the comic and tragic intersections between love and sex in and around a modern-day underground salon. A sex therapist who has never had an orgasm, a dominatrix who is unable to connect, a gay couple who are deciding whether to open up their relationship, and the people who weave in and out of their lives, all converge on a weekly gathering called Shortbus: a mad nexus of art, music, politics, and polysexual carnality. Set in a post-9/11, Bush-exhausted New York City, SHORTBUS tells its story with sexual frankness, suggesting new ways to reconcile questions of the mind, pleasures of the flesh, and imperatives of the heart.

She works as a couples counselor/sex therapist. She comes into contact with a couple: A slightly egotistical former child star Jamie (PJ DeBoy) and former sex worker James (Paul Dawson), the film’s other lead character. At the outset, James suggests to his boyfriend that they open up their relationship to have sex with others. During their first consultation, Sofia snaps, slaps Jamie, and then apologetically reveals her “pre-orgasmic” status.

James and Jamie meet a young ex-model and aspiring singer named Ceth (pronounced “Seth” and portrayed by Jay Brannan) and the three begin a sexual relationship. Meanwhile, James and Jamie’s life is being closely watched by their across-the-street stalker neighbor, Caleb (Peter Stickles). Caleb fears the inclusion of Ceth in James and Jamie’s relationship might break them up and thus destroy his ability to live vicariously through them, so he attends Shortbus, where he confronts Ceth.

Sofia begins to go daily to a spa with a sensory deprivation tank to meet with Severin, and the two begin to have intense conversations. Severin begins to help Sofia loosen up sexually; Sofia helps Severin achieve a deeper human connection than she had experienced before. One evening at Shortbus, Severin discusses with Sofia the idea of giving up sex work to pursue her dream of being an artist. The two then have an unplanned sexual experience, and once again Sofia is left unsatisfied.

Throughout the film, James is seen making a film about himself and his relationship. It turns out to be a suicide note. He attempts to take his own life and is rescued by Caleb, who calls for help, but is too embarrassed to wait with James for the help to arrive. He writes his phone number and email address on James’ face while he is unconscious. When James wakes in the hospital, he calls Caleb. James goes to Caleb’s home to be consoled, but does not contact Jamie or Ceth, neither of whom can understand why he wouldn’t call them or come home.

There follows an interlocking trio of scenes showing connections between the characters’ emotional problems and their sexual lives.

At Caleb’s house, he and James have sex, and James allows Caleb to penetrate him, something he has never allowed anyone to do before. Afterward, in a dramatic revelation, James is seen in the window of Caleb’s apartment by Jamie, who realizes in that moment that James is alive and okay.

Rob and Severin have a paid encounter where Rob asks to be flogged, something he couldn’t ask Sofia to do. As this progresses, Severin loses control and Rob tries to comfort her.

Sofia seems to have a dream of struggling through an overgrown, wild forested area to a gentle seashore where she tries to achieve orgasm again. On failing, she screams, and in the real world the lights go off across the city, seemingly caused by the simultaneous and collective frustration of the characters.

The film ends with a song by Justin Bond at Shortbus during the blackout.

Sofia arrives and finds Rob with Severin and after acknowledging him sits down by herself. James and Jamie also arrive followed by Ceth and Caleb. Justin’s song starts on a wistful note, but as it progresses it becomes more energetic and positive thanks to the arrival of the Hungry March Band.

This is mirrored in the actions and emotions of the actors.

Jamie and James make out on the floor, and Ceth and Caleb start to hit it off. Rob seems to find a friend, and Severin progresses from nervous anxiety to happy elation upon the arrival of the band.