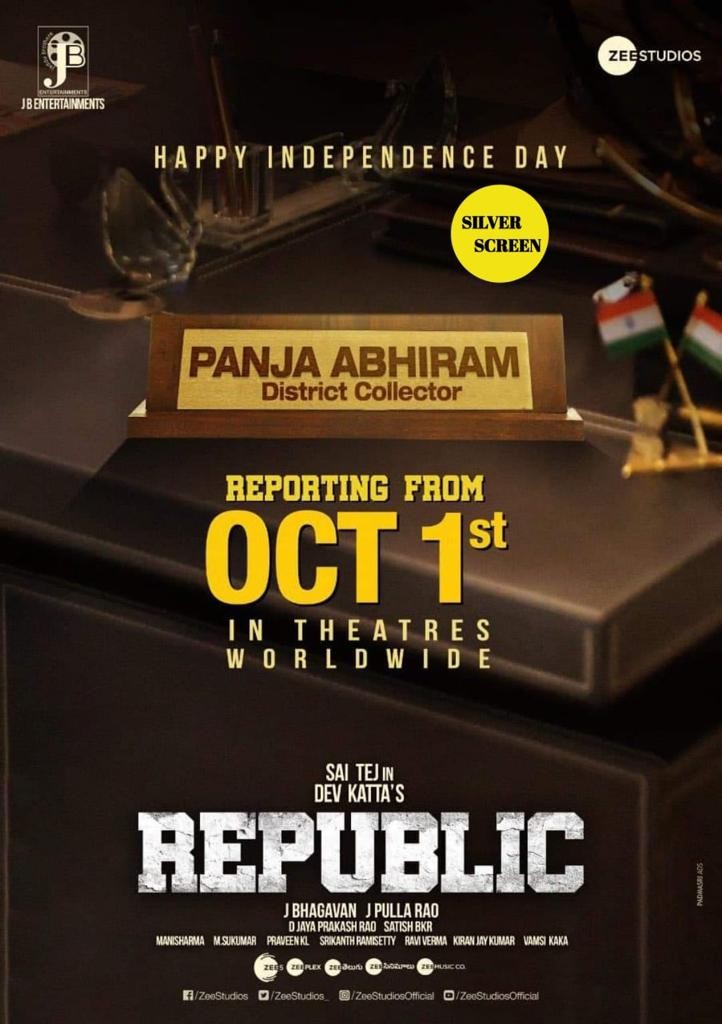 Republic is a romantic action drama movie directed by Deva Katta. The movie cast includes Sai Dharam Tej, Aishwarya Rajesh, Jagapathibabu and Ramya krishna are in the lead roles. The Music composed by Mani Sharma while cinematography done by M. Sukumar and it is edited by KL Praveen. The movie produced by Bhagawan and Pulla Rao under J B Entertainments banner.

In 1970, Kolleru Lake is one of the biggest freshwater lakes in India which is a pivotal lake for fishing and farming. For 40 years, the lake has been built on fishing farms mainly owned by Vishaka Vani while simultaneously polluting the lake alongside.

The story shifts to Panja Abhiram who is a smart and very arrogant person from Eluru that likes society to be truthful and honest after experiencing corruption within his own family with his father Dashrath being a corrupt government official which causes him to dislike his father.

With his high scoring in various exams, he gets a seat at MIT.

However, due to his father participating in an election rig, he decides to dive more into the political system to change it. He simultaneously meets Myra Hansen who is an NRI trying to search for her missing brother Varun who is known to have had an interaction with a local goon named Guna.

With a clean sweep in the election, Vishaka Vani becomes the next Central Minister of Andhra Pradesh. He then meets Mani, an auto driver, and his father trying to fight for justice against Vishaka Vani. At the same time, he and Myra come to know that Varun has been found dead, but they do not get any support from the police leaving it to a dead end.

After passing the UPSC exam, Abhi heads to his interview but after a PTSD episode on the train he ends up seeing Mani killed by Guna who is under Vishaka Vani’s orders.

Abhi heads to his interview after seeing all this but ends up not getting selected due to his mentality. However, a few days later he ends up getting the job as the District Collector.

He then finds out that he was selected by the UPSC board as an experiment of implementing him as the supreme authority of the district and that he cannot interfere with any politician in the state.

After he starts his job, he sets out to try and find Guna who has an encounter order against him, and they manage to kill him. However, at the same spot, they find Myra unconscious.

Abhi rushes them to the hospital to find that Myra has been brutally raped and is close to being killed by Guna due to Varun’s research. He then enquires about the children to find out that they have died and have still not been found.

Abhi filled with rage decides to address the media that the system is why things are occurring like this. He gets the video evidence of Varun and finds out about how Varun is a neurological professor and doctor.

The story then dives into a flashback on how Varun’s wife dies of a neurological disease that was caused by the fish in Kolleru Lake. He then sees more people affected and plans to research what happened and concludes that it was contaminated by Vishaka Vani’s fish farms. Enraged Abhi gets his father and the health officer both suspended for faking reports about the lake.

Abhi with this information visits Vishaka Vani to come to an understanding by removing her farms and all the construction on the lake. However, Vani sides with the fisherman by stating that they will all be stakeholders in her farms and gets them to turn against Abhi.

Abhi in an attempt to get both sides to go against Vani calls upon a meeting but ends up being very violent causing multiple lives to be lost.

With this all happening, the UPSC board suspends Abhi from his post. However, due to this his father also gets into trouble with the villagers causing him to get beat up.

Abhi saves his father and in a flashback, it is known that Dashrath was a very sincere officer but due to his sincerity he gets transferred to multiple states which also causes Dashrath’s wife and daughter to be killed which ultimately makes Dashrath adapt to the system and to become corrupt.

Abhi and Dashrath team up and they decide to appeal to the court with all the proper evidence. The Supreme Court then gets Vishaka Vani, Vijay Kumar, and Dashrath removed from their posts and gives them life sentences.

The Supreme Court also orders for all construction from the lake to be demolished at once.

With this outcome, Vani becomes hospitalized and tells Abhi that no matter how much he tries the system won’t change. However, a few days later, he finds construction starting again on the lake and confronts the villagers on why they chose to do it. They state that his caste ruled for 40 years but it is now their turn to rule, but Abhi ultimately ends up gaining support from Mani’s father.

Soon though, Abhi is found by himself at the edge of the forest by Mani’s father and his gang and is ultimately killed by them because they want the lake for themselves. This also prompts Vani to commit suicide and throws the entire state of Andhra Pradesh into distress.

The movie ends off with sincere officers that were killed in a similar way for what they have done for society.

This website uses cookies to improve your experience while you navigate through the website. Out of these cookies, the cookies that are categorized as necessary are stored on your browser as they are essential for the working of basic functionalities of the website. We also use third-party cookies that help us analyze and understand how you use this website. These cookies will be stored in your browser only with your consent. You also have the option to opt-out of these cookies. But opting out of some of these cookies may have an effect on your browsing experience.
Necessary Always Enabled
Necessary cookies are absolutely essential for the website to function properly. This category only includes cookies that ensures basic functionalities and security features of the website. These cookies do not store any personal information.
Non-necessary
Any cookies that may not be particularly necessary for the website to function and is used specifically to collect user personal data via analytics, ads, other embedded contents are termed as non-necessary cookies. It is mandatory to procure user consent prior to running these cookies on your website.
SAVE & ACCEPT
September 28, 2021 Updated: 1 year ago