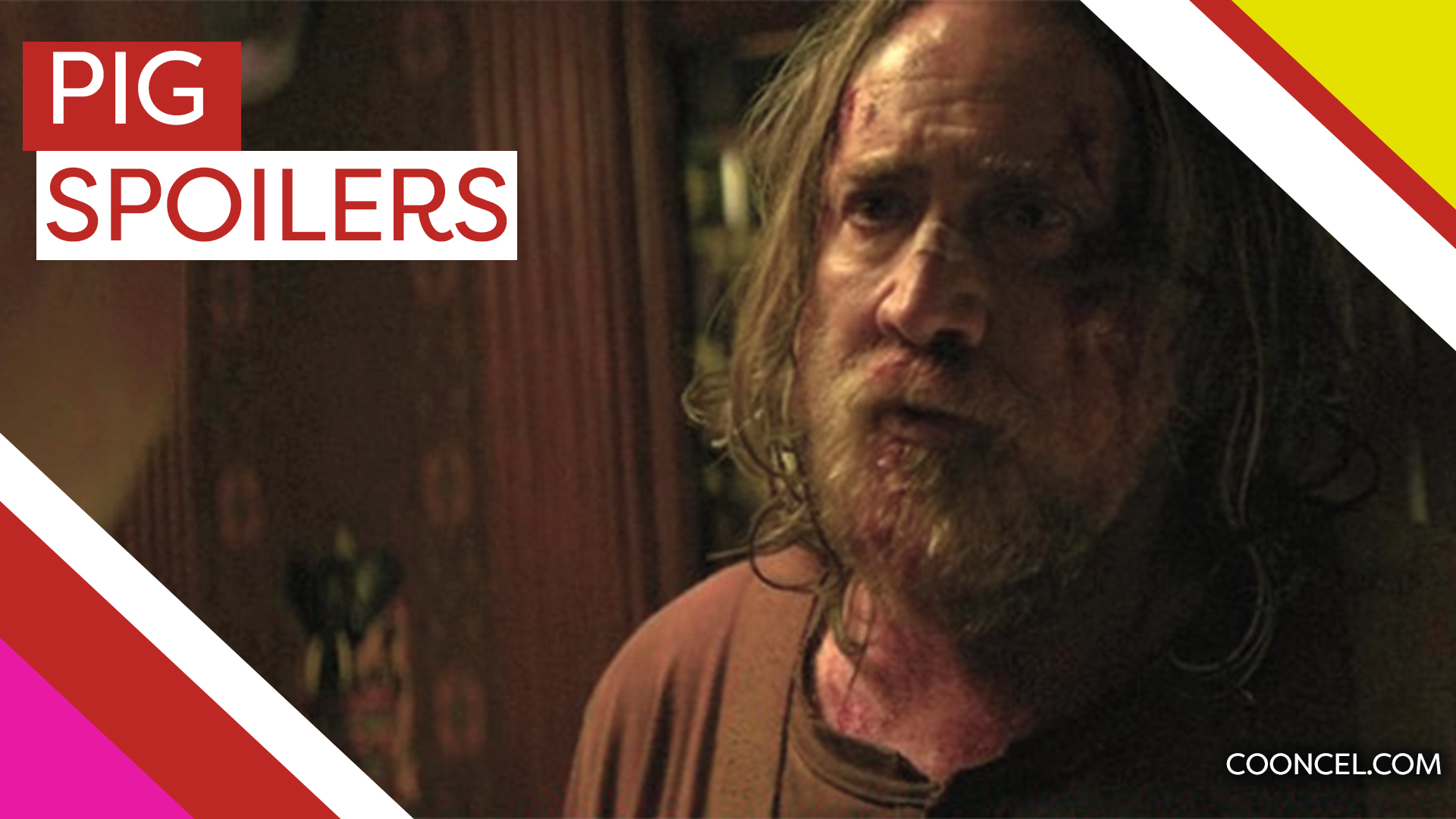 A truffle hunter who lives alone in the Oregonian wilderness must return to his past in Portland in search of his beloved foraging pig after she is kidnapped.

The movie starts with Rob (Nicolas Cage) cooking something in the wilderness by the river. He looks like a tramp and lives in a ramshackle cabin with a red-haired pig.

Rob and the pig hunt together for truffles in the Oregon forests. The pig is female and Rob feeds her with truffles for every truffle it finds.

Rob cooks mushrooms for the pig. It sleeps by Rob’s bed.

Rob trades truffles for some food and other supplies with Amir (Alex Wolff) who turns up on his yellow Chevrolet Camaro every Thursday.

Rob listens to an old cassette tape labeled ‘For Robin’. A female voice tells that she is trying to surprise someone. Rob stops the playback. Pig tries to comfort him.

One night a burglar gang breaks into the cabin, beats Rob, and steals the pig.

The next morning Rob takes his old truck and tries to drive out of the forest. The engine explodes halfway forcing Rob to go by foot.

He goes into the roadside diner looking for Marge. A waitress informs him that Marge died 10 years ago. Amir arrives and reluctantly gives Rob a lift to the truffle hunters’ camp. They ask camp leader Mac (Gretchen Corbett) if she saw a pair on a green pickup. Mac is furious when she learns that they stole Rob’s truffle pig.

She takes Rob to them, and they learn that some rich city guy in a black car is behind the robbery.

Rob asks Amir to take him to the city.

In Portland, he meets Edgar, who calls Rob by his full name Robin Feld. He says that Rob used to be someone, now he is nobody. Amir is surprised that Rob knows Edgar.

It is revealed that Edgar runs a fight club for restaurant workers for 30 years, but only cares for people who mean something.

Rob decides to take part in a fight so that to get information from Edgar. He starts the fight but allows another fighter to beat him without trying to fight back.

Edgar is impressed and gives Rob a note with details of his pig’s whereabouts. Amir takes wounded Rob to his apartment.

Rob asks Amir to get a reservation for lunch at a pretentious trendy restaurant Eurydice.

Amir tells Rob his parents always argued with each other. The only time they were happy was when they visited a restaurant where Rob was a chef at the time. They were talking about that dinner for months. Amir says his mother killed herself eventually, and his father is not a very supportive figure.

Amir asks his friend to help with a reservation at Eurydice. He declines until Amir says that he needs a reservation for Robin Feld.

Rob visits the house he used to live in. There was a persimmon tree that is dead now.

Rob requests chef while having lunch at Eurydice. Chef Derek Finway recognizes Rob and seems to be delighted to meet him. Rob reminds him that he fired Finway for constantly overcooking the pasta.

Finway explains the pig was stolen because he needed the first-class truffles for his winter menu.

Rob asks if Derek likes his place and reminds him that he always wanted to open a pub. Derek becomes agitated and can’t clearly explain why he did not follow his dream. Rob tells him not to care about people who don’t care about him.

It is revealed that the pig was stolen at Amir’s father’s orders. Amir is not ready to face his father and is even ready to buy Rob a new pig and take a hit for the lost season. He gives Rob his father’s address only after he starts crushing Amir’s car. Rob tells Amir their cooperation is over and goes away.

Rob steals a bike to get to the address.

Amir drives to a hospital. It is revealed that his mother’s suicide attempt was not successful. She is not dead but is in a coma, and bedridden.

Amir’s father, Darius, offers Rob fifteen, then twenty, and finally twenty-five thousand dollars for the pig. He starts to threaten to chop the pig into bacon if Rob declines the offer or mess with Darius again. He also says that Amir told Darius about Rob the day they met for the first time.

Rob goes away. Amir meets him by the house offering a ride. He apologizes for telling his father about the pig.

Rob explains that he doesn’t need the pig to find truffles, and he looks for the pig because he loves her.

Rob gives Amir a list allowing him to use his name to get all the stuff from it.

Pig Part Three A bird, a Bottle & a Salted Baguette

It is revealed that Rob had a wife, Laurie.

Rob visits his restaurant made into a bakery because he never returned to take it back. His former employee, Helen, is in charge of it now. He asks her for a salted baguette.

The duo breaks into Darius’ house and Rob starts cooking. Amir asks Darius to come with him claiming he made him dinner. They sit at the table and Rob serves the dinner and wine for all three of them.

Darius drinks wine eats a bit of a meal and starts choking. He goes to the library to drink whiskey because the dinner tasted exactly the same as the one, he and his wife liked so much so long time ago.

He is furious and tells Rob to get out, but then confesses that the pig was already dead by the time she was delivered to him. Rob bursts into tears.

Rob and Amir go to the diner to have two brownies with coffee. Rob says that if he didn’t start looking for the pig, she’ll still be alive in his head.

Rob confirms with Amir their next meeting on Thursday and takes a walk. Amir sits in his car crying.

Rob gets to his house and turns on the cassette tape. Laurie’s voice on the tape says it is Rob’s birthday; she starts singing a song for him.

The protagonist experienced the loss of the significant other once again. The previous loss made him go into exile, leave all his belongings away and start a new life as a different person. He learned the lesson and overcame the current situation in a much better fashion. He managed to make a friend, and not to get angry with the rest of the world.

A touching drama with a surprisingly good performance of Nicolas Cage. It is not intended for entertainment purposes, but rather to make you think out your life and priorities.

Title: Pig
US Release Date: July 16, 2021
Starring: Nicolas Cage, Alex Wolff, Adam Arkin
Directed by: Michael Sarnoski
Written by: Michael Sarnoski
Synopsis: A truffle hunter who lives alone in the Oregonian wilderness must return to his past in Portland in search of his beloved foraging pig after she is kidnapped.
Trailer: https://cooncel.com/pig-official-trailer-2021-nicolas-cage-video/