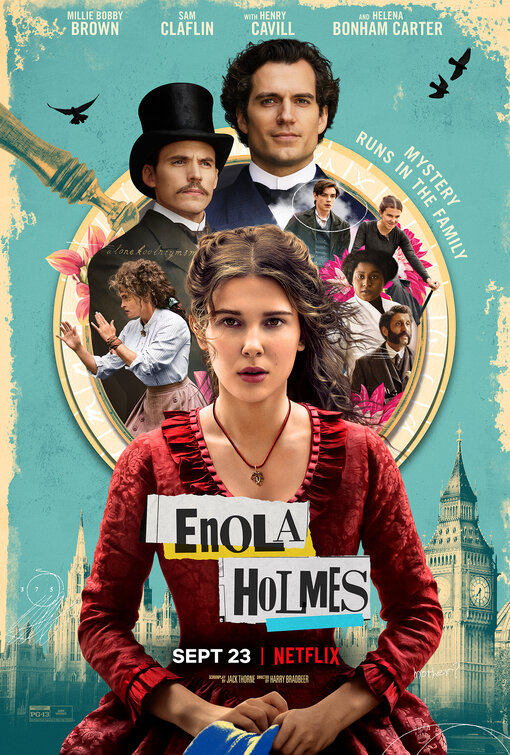 When Enola Holmes-Sherlock’s teen sister-discovers her mother missing, she sets off to find her, becoming a super-sleuth in her own right as she outwits her famous brother and unravels a dangerous conspiracy around a mysterious young Lord.

Enola Holmes is the youngest sibling in the famous Holmes family. She is extremely intelligent, observant, and insightful, and defies the social norms for women of the time.

Her mother, Eudoria, has taught her everything from chess to jujitsu and encouraged her to be a strong-willed and independent thinking young woman.

On the day of her sixteenth birthday, Enola awakens to find that her mother has disappeared, leaving behind only some birthday gifts.

A week later, she rushes to the train station to meet her brothers, Mycroft and Sherlock, who fail to recognize her at first, not having seen her in many years. Sherlock finds her to be an intelligent girl, whereas Mycroft finds her troublesome. As her legal guardian, Mycroft intends to send her away to a finishing school run by the stern Miss Harrison.

The flower cards left by her mother reveal secret messages and lead to hidden money, which Enola uses to escape disguised as a boy. On the train, she finds the young Viscount Tewkesbury hidden in a travel bag. She thinks he is a nincompoop but warns him that a man in a brown bowler hat (named Linthorn) is on the train searching for him.

Linthorn tries to kill Tewkesbury so they jump off the train to escape. Neither having any food, Tewkesbury forages for edible plants and fungi. They travel to London, where they part ways.

Disguised as a proper Victorian lady, she continues to trace Eudoria and leaves cryptic messages in the newspaper personal advertisements. Enola discovers pamphlets and a safehouse containing explosives and learns that Eudoria is part of a radical group of suffragettes.

She is attacked by Linthorn, who tortures her for information about Tewkesbury, attempting to drown her. They fight, but she is able to ignite the explosives and escape. Enola decides to pause the search for her mother and instead find Tewkesbury again to save him because he is not capable of defending himself.

Enola finds Tewkesbury selling flowers in Covent Garden and warns him of the danger. She helps him escape but is caught by Lestrade and imprisoned in Miss Harrison’s finishing school by Mycroft.

Sherlock visits her and admits he is impressed by her detective work. Tewkesbury sneaks into the school, and they escape together, stealing Miss Harrison’s motor car.

They reach a fork in the road and, rather than returning to London, Enola decides they must go to Basilwether Hall and face Tewkesbury’s uncle, who she has deduced was trying to kill him. The estate is seemingly deserted, but Linthorn ambushes them, firing a shotgun. Enola trips him using a jujitsu move, causing a fatal head injury.

Tewkesbury’s grandmother is revealed as the real villain; a traditionalist, she did not want him to take his father’s place in the House of Lords and vote for the Reform Bill. She shoots her grandson in the chest, but he survives thanks to a plate of armor he had hidden under his clothes. Sherlock arrives at Scotland Yard and Lestrade asks him two questions: first, how he managed to solve the case, and second, how his sister solved it first.

Enola shares a tearful goodbye with Tewkesbury. She finds and deciphers a message in a newspaper but deduces that it was not sent by her mother.

At the meeting point, Sherlock and Mycroft discuss Enola, and Sherlock suggests becoming her guardian. They decide to leave, and Sherlock notices a clue, but chooses not to look for Enola.

All the while Enola has been watching disguised as a newsboy. Returning to her lodgings, Enola finds her mother waiting there. They embrace, and Eudoria explains why she had to leave, and why she must leave again, but she is impressed by what Enola has become.

Enola has found her freedom and her purpose – she is a detective and a finder of lost souls.

This website uses cookies to improve your experience while you navigate through the website. Out of these cookies, the cookies that are categorized as necessary are stored on your browser as they are essential for the working of basic functionalities of the website. We also use third-party cookies that help us analyze and understand how you use this website. These cookies will be stored in your browser only with your consent. You also have the option to opt-out of these cookies. But opting out of some of these cookies may have an effect on your browsing experience.
Necessary Always Enabled
Necessary cookies are absolutely essential for the website to function properly. This category only includes cookies that ensures basic functionalities and security features of the website. These cookies do not store any personal information.
Non-necessary
Any cookies that may not be particularly necessary for the website to function and is used specifically to collect user personal data via analytics, ads, other embedded contents are termed as non-necessary cookies. It is mandatory to procure user consent prior to running these cookies on your website.
SAVE & ACCEPT
September 30, 2020 Updated: 2 years ago